This post is part of a series. Go here to see all.

I am excited to share some more revelations about the Treadwell family of Bridgeport CT!

As I researched Elberton Treadwell, his wife Laura, son Gerrie, and daughter Laura Ione, I found some great facts about them in old newspapers. If you are researching your family tree, newspapers can be an excellent source of information. You can access some papers online through local historical societies and at newspapers.com (paid membership needed). Or visit the local library and ask if they keep back issues of papers digitally or on file.

I was able to find newspapers for Bridgeport CT online at newspapers.com and found several references to the Treadwell family. Elberton E. Treadwell worked for the Massachusetts Accident Company, an insurance agency. It seemed he was in charge of their office in Bridgeport.

Gerrie Treadwell who I referred to as the teen boy in my previous blog posts, was actually older than he looked in those pictures. I discovered records online at Ancestry.com that revealed he was born in 1880. He was short in stature and his Connecticut WWI draft record lists his height as 5 ft. 5 inches. Gerrie married Lottie King and had two children. He remained in Bridgeport CT and worked as a clerk for the Bridgeport Hydraulic Co. The silly picture with him and a friend pretending to have his head in a bowl, I believe was John Larson. I discovered that John lived with the family for a bit according to a US Census. The picture list that was photographed by the seller of the negatives said “John Beheaded”.

Laura Ione Treadwell, the little girl in the pictures grew up and attended Yale. I found this out from old newspapers I accessed at newspapers.com. I discoverd through her marriage certificate and census records that she married Ellis Baldwin and had two children. She was called Ione by the family. I am hoping to find descendants of Gerrie or L. Ione so that I can discover more about the family. Here is Ione as a little girl, with her big brother, Gerrie.

Remember the pictures of the bedrooms? Come to find out they aren’t rooms in the Treadwell home at 40 Center Street. The caption for the pictures on the list sent to us by the seller of the plate glass negatives reads “Miss Evers room at BH North” and "Miss Evers room at BH East". I found one Miss Evers in my research of old newspapers that was in the Treadwell’s social circles. Her name was Minnie Evers. Maybe she lived in a boarding house? I discovered that Laura Ione attended Yale. Perhaps this was a dormitory of sorts at Yale or another college the children attended? We may never know, but the pictures are interesting, just the same.

Today, I leave you with the best story and possible answer to our question of the man with the pie.

First, I found maps of Bridgeport at the time. These are indexed and published with the Library of Congress and accessed online. 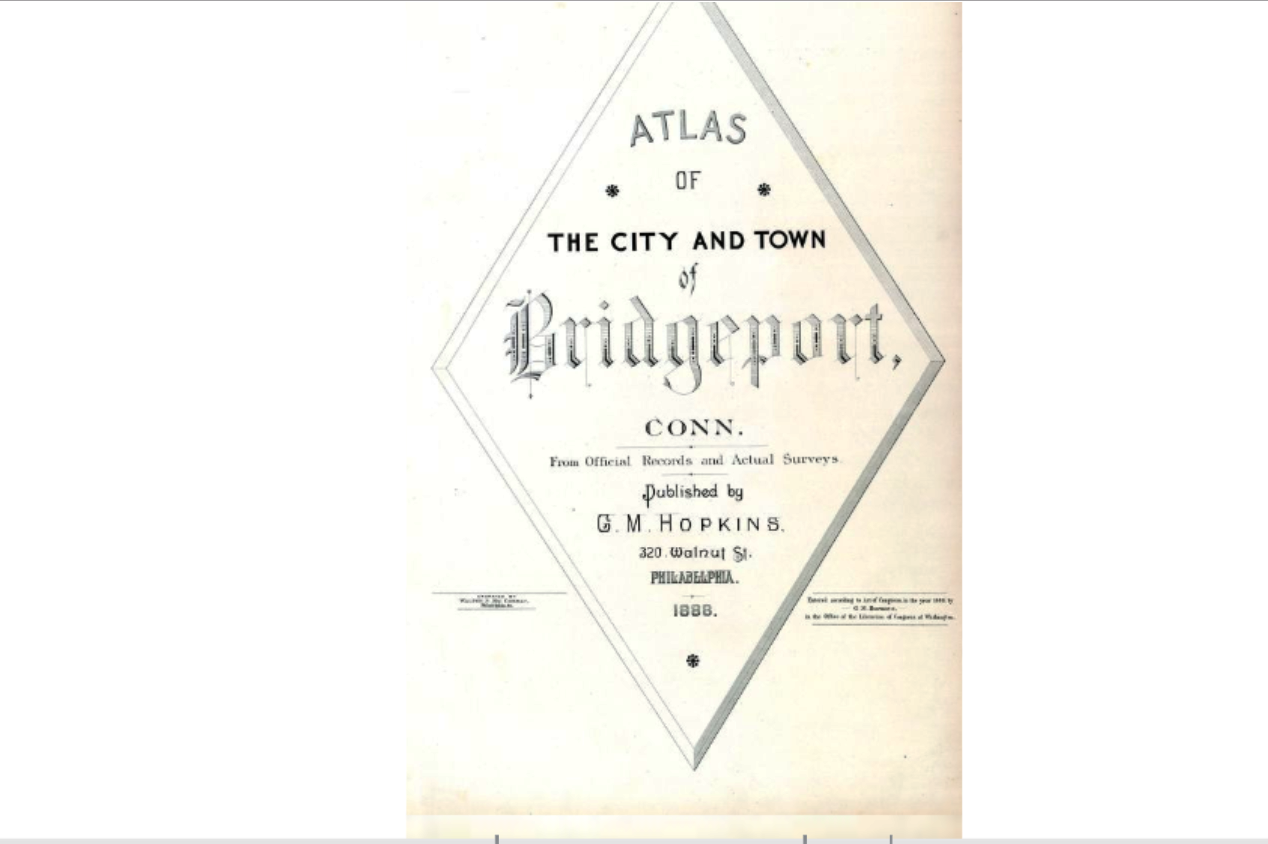 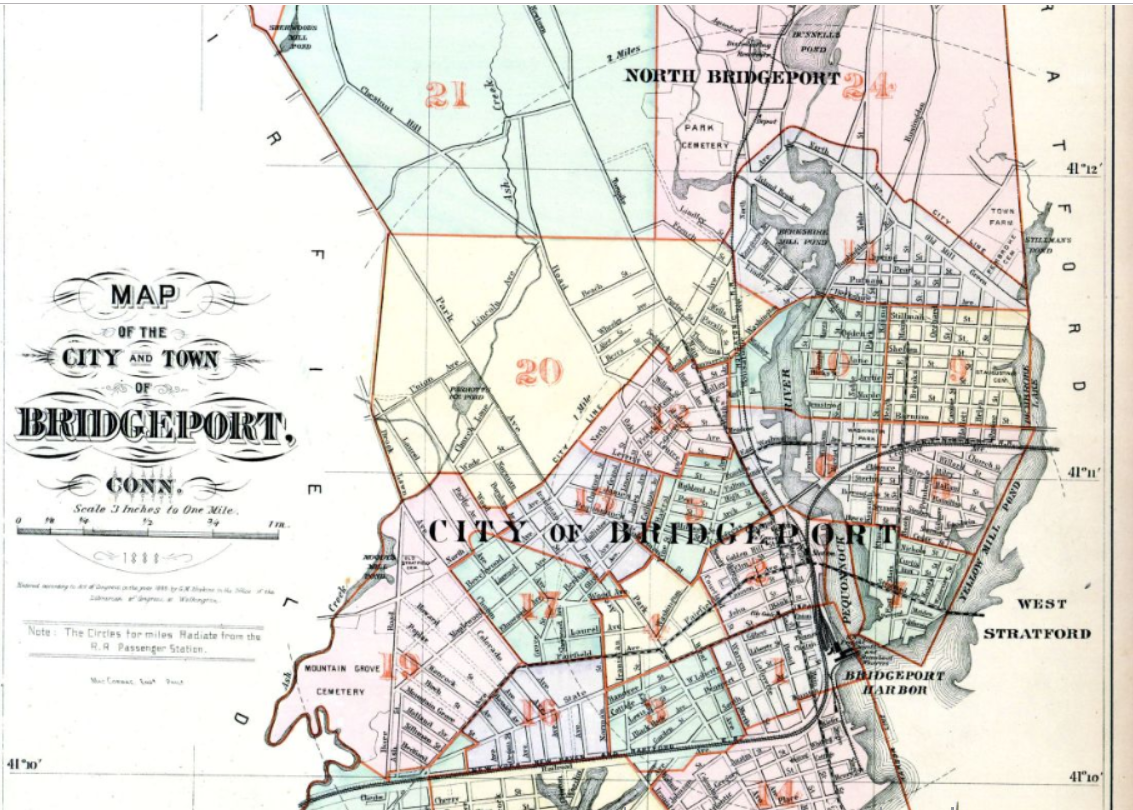 By going to the plate number for the neighborhood that included Center Street in Bridgeport (Plate 5), I was able to find where the Treadwell's house was. 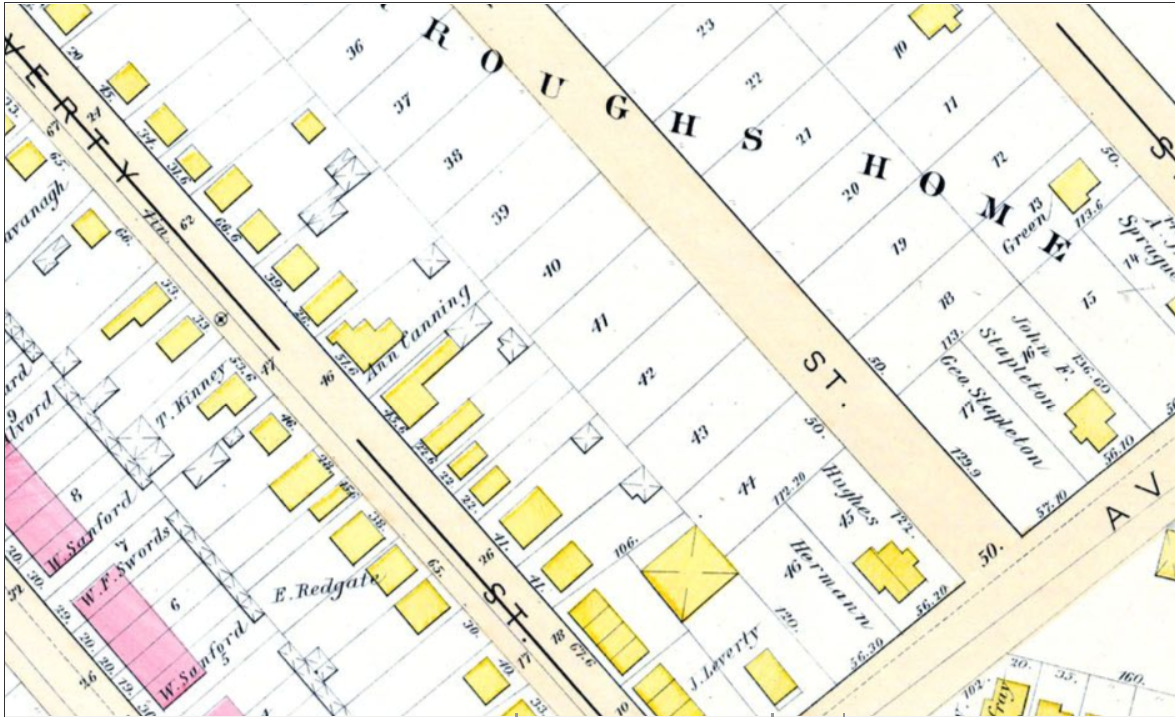 And nearby (about 2 blocks over) there are brick buildings. On this map, red buildings indicate brick. I believe this man in the picture worked in one of these buildings. I still haven’t found out which one yet.

The man is dressed nicely, so I am assuming he didn't work for a factory or the railroad. By looking at the picture which reveal a backdoor peek into the business, I see what appears to be apothecary cabinets. So, I am guessing that the business may be some kind of pharmacy.

There has been much speculation by Paul Holbrook, his followers on social media, and myself as to what this gentleman is holding. I do think he is holding a pie and here is why.

In that time - yes, even in the North, there were different standards for black Americans. As hard as it is to believe and as unjust as it was, it would have been assumed that because he was a black man he would have had to eat his lunch or take his break at the back of the building. We know that he is sitting on the back stoop because we can see the front awning through the door and the front windows behind him. I believe that white object hanging off near his left hand is a napkin. And the pie, though it appears rather flat, was the typical size and shape of a pie made and sold in shallow pie tins by Frisbie's Pies of Bridgeport Ct.

Frisbie's pies had a pronounced crust that was thick on the top and it appears that way in the picture to me. I don’t think the man is holding papers or any other merchandise because if he was there to sell something or deliver something he would be in the shop and greeting customers. I believe he is there on his break and enjoying a Frisbie's pie.

William Frisbie was living near the Treadwells and baking pies out of his Bridgeport CT bakery. His pies were delivered in tins stamped with the name Frisbie and delivered by trucks to the people of Bridgeport. I found Frisbie living and selling pies in Bridgeport at the same time as the Treadwell family and in the early 1900's the pies were quite popular. Later, Frisbie’s son built a 3 story bakery for the pies and they became even more popular. Frisbie’s pies are still in business today.

But here is where it gets so interesting! Their pie tins were shallow and light weight and the perfect disc shape.

Delivered to students at Yale, they would take their empty pie tins and launch them like a flying saucer at each other and holler “Frisbie!” Yes, you guessed it! This was the invention of the famous toy we use today. A company named Wham-o began producing them as toys for children.

You can read more about Frisbie's pies by going to https://www.frisbiepie.com/our_story/

For now I am off to bake a pie. Who knew this journey with the glass plate negatives would reveal so many interesting facts?

To read the next post in this series, go here.